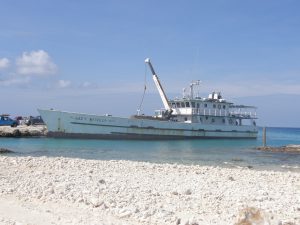 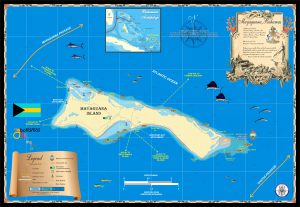 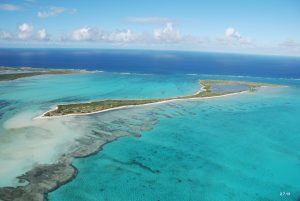 Whenever Mayaguana comes to mind I remember approaching it’s western shore a few years back. Since the island is a long way out, the eastern most in the Bahamas, we were cruising slow to conserve fuel for the week of diving ahead. I was at the upper helm and sensed something to my left, turning I stared into the curious eye of a Humpback whale in the air right next to our boat. Shocked, I yelled “whale!”.  My boat partner sitting next to me caught the tail going out of view and the big splash that followed, my wife ran out of the cabin screaming “damn it, I always miss the whales!!”. We were amazed how quietly it had come out of the sea to eyeball the humans.

Mayaguana is the only Bahamian Island to retain its original Indian name and remains of Lucayan Indian sites have been found along the shore. The island is relatively large, about 25 miles wide, ringed with lovely harbours that thrive with bonefish and other sea life. Active colonies of Flamingos can be seen and native iguanas live on the east side of the island. There are endless beaches with shipwrecks, reefs and spectacular underwater walls for diving. One wreck is the British Naval sloop “HMS Driver“ which wrecked on Mayaguana in 1861 just fourteen years after being the first ship to circumnavigate the globe in 1847. It’s cannons can be found on the northwest tip of the island in just a dozen feet of water. Cannon balls are neatly stacked adjacent to the guns, corroded together and frozen in time (photo of my whale blind wife Marielle is shown next to them).

Due to it’s isolation, Mayaguana’s population struggles to maintain itself as young people often leave for work elsewhere. There was a surge in residents during the 1960s NASA Mercury and Apollo Space programs when the U.S. had a military base and tracking station on the island. The station charted the trajectory of intercontinental ballistic test missiles launched from Florida along with spacecraft orbiting earth. It also served as a temporary refueling base for military aircraft, but all was abandoned in the 1970s and the island’s population fell into decline. Remains of the facility are still evident with a long runway, part of which has been restored as Mayaguana’s new airport.

The people of Mayaguana are hospitable and welcome visitors into their towns of Pirate’s Well, Betsy Bay and Abrahams Bay. There’s now a good runway and flights from Nassau for regular access. If you enjoy remote islands with spartan facilities while you explore remote beaches that few people walk over the course of a year, where flocks of pink flamingos can be seen and nature rules amongst the harsh, scrubby landscape, Mayaguana will welcome you.

For more history on the islands of The Bahamas check out book The Bahamas: A History Through Maps. Visit our site to see all of our custom maps or call today at 239-963-3497 with any questions or special orders!