Tag: behind the scenes 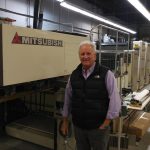 Todd at the printing press in Toronto. 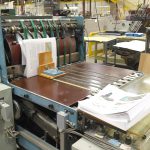 Beginning of books being bound in Nashville.

Writing history books is hard work, no doubt about it. Everything you write has to be backed up by fact and by experts who edit your work. Then it's off to the printer and for a book with extensive exhibits like ours, a special book bindery. The Florida Keys is my third book, each an extensive and exhausting project.

People ask how I do it with a busy career in Ocean Engineering and the answer is two fold. First is perseverance; I often write between 4 and 8 AM before interruptions start, it's when I do my best work. Second is help; Keys co-authors Brian Schmitt and archaeologist Bob Carr are world experts on the chapters they wrote, I couldn't have done it without them. Finally my experienced staff who turn my ideas into exhibits and my writing into pleasant narrative, it's not easy to make history fun for most people to read.

I also get asked why we do it, that answer varies. My first book Naples Waterfront – Changes in Time was inspired by older clients who built the waterfront communities near my home. They were dying out and over time came to trust me with their old stories, maps and photographs. One old fella had shared rare historical insight with me and the next time I saw him he asked "how's your book coming?" I was embarrassed with little progress to show but when he later died there was no longer a choice. Seven years later the book was published, yep, 7!

The Naples book was more successful than I could have imagined and a Bahamian friend asked if I could do one for his country. I'd worked there for many years and had read every history book I could get my hands on. We'd also made popular maps of the Bahamas, one hangs in U.S. Customs. Five years later A History of The Bahamas Through Maps was born, yep, 5.

The Keys book began when my friend Brian Schmitt half jokingly suggested my next should be on the Keys, he liked the Bahamas. I said sure, also in jest, knowing what a gargantuan task that would be. Brian and I both collect antique maps and his famous 1591 version of Florida is on the Naples book cover. His map collection is much better than mine, world class in fact. When he agreed to do the mapping chapter our jokes became reality and yet another book was born, but this time not without drama.

While we worked on the Keys I was asked to speak at the annual Miami Map Fair, the largest antique map show in the world. Since the Keys book was due out about the same time as the Fair I suggested we announce something featured in the book, that Ponce de Leon did not discover Florida in 1513 as is written. There are Ponce de Leon streets, monuments and school book references, so we were being bold to challenge Florida history. Our proof lies in the fact a half dozen maps pre-dating 1513 show the Florida peninsula. Some of these are featured in the Keys book so we needed it for back up at the Map Fair if I was to make the statement.

The drama to deliver the book on time started when our printer suddenly passed away over Christmas in Canada. His widow said they couldn't honor the deadline, the book wouldn't be done on schedule.

Soon I was in Toronto working with the widow to help get it done since hints of our revisionary history statement had already been released to the press. I visited the giant printing press and met the employees who were already working on the book, they were great. First lesson, if the factory is behind schedule, go there. The possibility of meeting the deadline emerged but there was another critical step.

Nashville has one of the few facilities in America that can produce a binding that allows a book to lay flat when opened. This was needed for our map overlays, a first for the Keys.

Suddenly I was in Nashville meeting the employees of the bindery. They had just started working on our piece, of course, refer to First lesson. Spending a few days there moved the process along since I could answer questions quickly, but the due date was fast approaching with an outcome still uncertain. Only after a second trip to Nashville a couple weeks later did I finally hold copies of the book in hand for the Miami press conference. The second trip took driving 2,000 miles in four days, a feat I hadn't done since my 20s. My reward was falling in love with Nashville's incredible music scene with one too many Titos & Tonics. My punishment was driving home the next day.

That's the story of how we made the Keys book, it arrived just in time for COVID-19 to shut down of the Map Fair. We still had the press conference which was attended by a single Miami Herald reporter and photographer. They did a really nice article, but our book launch didn’t get the momentum we hoped for due to a worldwide struggle with the pandemic.

The Keys History book is our best work yet and word is slowly getting out with good reviews. It will, however, likely be my last non-fiction since taking years to produce them sucks the life right out of you. I'm now working on a historical fiction now with wild stories to tell, we'll see how that goes.

You can find more information about the Keys book on this website.