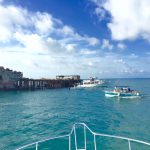 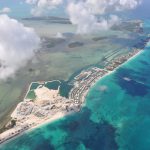 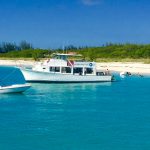 If you plan to travel to Bimini, be sure to research the latest travel advisories and have any documentation ready. This also applies to the many boaters passing through Bimini to clear customs and obtain their cruising permit. But no matter how you travel to Bimini, you’ll be visiting a country rich in history.

The Bahamas and Bimini were populated by Lucayan Indians when the Spanish arrived. They soon enslaved them to work in the mines of Hispaniola, today’s Dominican Republic and Haiti, exterminating the population. Bimini was northwest of the route first taken by Columbus in 1492 but was likely visited by Ponce de León during his first expedition to Florida in 1513. While de Leon was given credit for discovering Florida in 1513 he did not, a number of earlier maps clearly show the Florida peninsula. He did however name it “La Florida.” Reports of him looking for the Fountain of Youth in Bimini are not supported by the historical record.

Pirates were very real in the Bahamas and in the early 1700s a large community of them took over Nassau from the British. They attacked ships of any nation, but the biggest prize was Spanish galleons using the Gulf Stream off Bimini to return to Spain, laden with treasure from the New World. Pirates no doubt used the shallow waters around Bimini to lie in wait for passing ships.

Wreckers made their living salvaging cargo from ships that sank on the reefs surrounding Bimini. The five founding families of Bimini were licensed wreckers in 1834. This date coincides with British emancipation of slaves in the Bahamas; their descendants make up most of today’s population. Early residents eventually became known as Conchs, making their living off the sea by fishing, sponging, and wrecking. For generations wrecking was one of the few profitable endeavors in The Bahamas but lighthouses soon made wrecks less common. Gun Cay Light was built in 1836 south of Bimini, and Great Isaac Lighthouse in 1859 on a little island twenty miles north of Bimini, which stands more than 150 feet tall, making it one of the tallest in The Bahamas.

The country struggled financially but during the American Civil War the south used the “neutral” British Bahamas to trade cotton for European guns and supplies, which were run past the Union blockade into southern ports. This provided some prosperity. Good times returned during American Prohibition (1920–1933) when liquor was legal in the Bahamas. Bimini and nearby Gun Cay and Cat Cay were waypoints where schooners laden with liquor would anchor, acting as open warehouses for the American rum-runners. The concrete shipwreck seen today south of Bimini, the Sapona, was used to store liquor but was wrecked by a hurricane in 1926 along with the original Bimini Bay Rod and Gun Club which included a large hotel and casino.

Chalk’s Flying Service began flying the Bimini route from Miami in 1919, and service continued until a tragic crash in 2005 killed a number of Bimini residents and doomed what was the world’s oldest airline of the time. Just a year later in 2006 the ‘Compleat’ Angler Hotel burned down, an iconic Bimini landmark that had hosted Ernest Hemingway as he fished for huge Blue Fin tuna that were once abundant.

Today’s Bimini is still host to fisherman and gamblers alike!

To learn more about history of Bimini and other islands in the Bahamas, check out A History of The Bahamas Through Maps. The book can be purchased online at this website. For all questions, please call us at 239-963-3497.