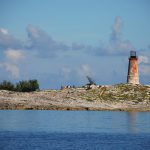 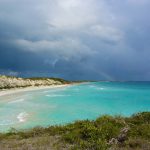 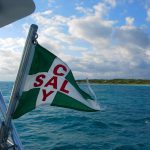 The Cay Sal Bank is one of my favorite places in the Bahamas from many perspectives. It’s an extremely remote area with pristine wildlife but no public access unless you have a boat, or a helicopter! We have had fabulous trips for work and exploration on many of the islands around Cay Sal, and the Bank has turned into a favorite vacation destination. Marathon, in the Florida Keys, is fifty-five miles to the north with Cuba lying half that distance to the south. You have to clear Bahamian customs to be legal before you go, but the nearest facilities are in Bimini or Cat Cay, well over 100 miles away. Cay Sal, meaning “salt cay” in Spanish, was discovered during exploration of the New World and is depicted on many of the first maps. The island has an interior lagoon where s ea salt could be easily produced by solar evaporation and there are records of the Spanish doing just that. An 1824 English map also shows “Salt Rakers Hutts” on the island when it was a British possession. Salt was in great demand as a preservative prior to refrigeration; it was used to preserve meat, seafood and many other commodities. In 1839 a lighthouse was built by England’s Imperial Lighthouse Service 15 miles north of Cay Sal on Elbow Cay. The location was strategic to Gulf Stream shipping, warning vessels off the Bank which has claimed many ship wrecks ov er the years. The remains of ships can still be seen in shallow water. In the early 1950s the Cay Sal Aeromarine Club was formed with Sir Roland Symonette as the Bahamian partner and Ernest Hemingway included on the American side. The Club burgee is shown at the top of the page. The island was used an exclusive fishing destination with part of the lagoon dredged for a marina and the fill used to create an airstrip. The last remaining structure was used by the Bahamas Defense Force up to the early 1990s, it has since been burned down. The island is less than thirty miles off the Cuban coast and was ideal for spying on the new communist regime after the Cuban revolution around 1960. This is when Howard Hughes became the final member of the Aeromarine Club and suddenly American missions to oust Castro were being launched from the island. The remote nature has left the Cay Sal Bank exposed to poaching by nations including Honduras. Two “motherships” from that nation were caught in the 1990s poaching fish, turtles and crawfish (lobster). The incident turned into an international affair when Bahamian police officers placed on the arrested vessels were taken hostage by the Hondurans as they fled for home port. American jets were scrambled in pursuit and the Bahamians were eventually released unharmed. To learn more about history of Cay Sal and other islands in the Bahamas, check out A History of The Bahamas Through Maps. The book can be purchased online on this website. For all questions, please call us at 239-963-3497.
Read More
Categories: Book Blog
Back to Top