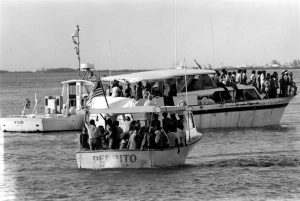 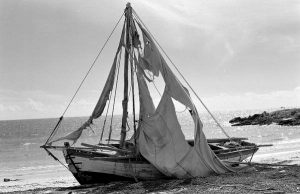 Refugees have been coming to the Keys since the few remaining Florida Indians fled there as American settlers poured into the mainland from the north. The last of them left with the Spanish to be resettled in Cuba as England took over Florida in 1763. Then there were Bahamians fleeing their impoverished nation. They came in the early 1800s as plantations the British Loyalists from America started, on Bahamian land grants, failed in mass. They were on the wrong side of the Revolutionary War and ended up with worthless land in the Bahamas. The Keys had similar rocky soils, reefs to fish and wrecks to salvage just like the islands they left, but closer to America's emerging markets. It's been noted that in 1860 two-thirds of Key West's 3,000 residents were of Bahamian decent. Next came Cubans as political refugees fleeing wars of independence from Spain, first from 1868 - 1878 and again before the Spanish-American War of 1898 which delivered the independence they had longed for. The political exodus started again with Fidel Castro in 1960 and peaked in 1980 when 125,000 refugees joined the Mariel boat lift to Key West. Unfortunately those refugees included criminals from Cuban jails and mentally ill patients from institutions which the Cuban government dumped on America after President Jimmy Carter offered to accept Cuban refugees. Cubans continue to die at sea desperately trying to escape the communist island today. To learn more about the history of the Florida Keys, check out our latest book The Florida Keys: A History Through Maps here. Island Map Store also offers customizable, decorative maps of the United States coastlines along with Bahamian, Caribbean, and International maps. Call today to learn more (239) 963-3497!
Read More
Categories: Book Blog
Back to Top