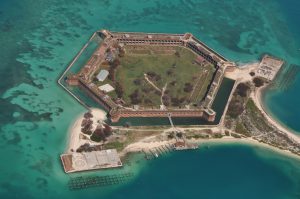 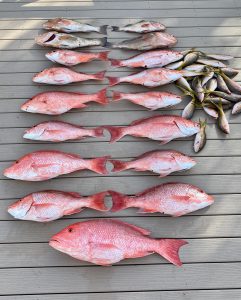 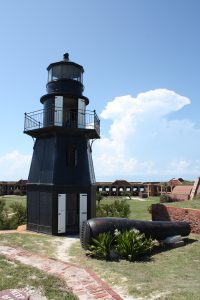 I just had a wonderful fishing trip to the Dry Tortugas with Fort Jefferson and the Loggerhead Key Lighthouse visible on the horizon. We ran down from Naples at about 60 mph to an area just outside the park boundaries. Red snapper are in giant congregations this time of year making it was easy to catch our limit along with Yellowtail snapper and some large Red grouper! I’ve been to Ft Jefferson a number of times and it’s something every seaworthy Floridian should see, truly a national treasure. The name Tortugas came from Ponce de León when he was exploring Florida in 1513. He named the small islands Las Tortugas or “the turtles” which were in abundance there. “Dry” was added in later years noting the lack of fresh water. The islands were used as a base for salvaging ship wrecks during centuries of Spanish rule and the most famous wreck of them all, Atocha, sank just thirty miles to the east. The history of Fort Jefferson began when the United States acquired the Florida Territory from Spain in 1819. The Dry Tortugas were seen as strategic in protecting the new American Territory and work began with a lighthouse on Garden Key in 1825 and on the fort in 1847. A new, more powerful lighthouse was built on nearby Loggerhead Key in 1856. At the beginning of the Civil War in 1861 the fort was partially completed and was used as a Union prison for Confederates. The prison’s most famous inmate was Dr. Samuel Mudd, convicted of aiding John Wilkes Booth after he assassinated President Abraham Lincoln in 1865. He was later pardoned. The bricks in Fort Jefferson are two different colors; one for bricks from Confederate states before the war and a different color from northern states used during the war. Shore facilities at Fort Jefferson provided a critical coal fueling station in the late 1800s as Navy and merchant ships transitioned from sail to steam. Steamships were safer since they no longer depended on wind & sail to avoid the Keys infamous reef. Two massive piers were built to store coal and the U.S. Navy dredged channels so the largest battleships could load alongside. In 1898, the Navy’s North American Squadron steamed into Key West in preparation for the Spanish-American War in Cuba. The fleet was so large it was relocated to the Dry Tortugas where Fort Jefferson could fuel the ships. Hundreds of pilings from the old piers can still be seen today. By WWI, ships were switching from coal to oil because it was lighter to carry and the fueling station was abandoned. During WWII seaplanes operated out of a base at Fort Jefferson, greatly extending the Navy’s range for the detection and destruction of German submarines operating in the Gulf Stream and in the Gulf of Mexico. The fort is 60 miles west of Key West. In 1935 President Franklin D. Roosevelt designated Fort Jefferson a national monument. Large areas of the Dry Tortugas are now one of America’s newest national parks. The park includes more than 100 square miles with only forty acres, including Fort Jefferson, above water. Today Fort Jefferson is a lovely place to visit by boat or by seaplanes, which operate out of Key West. Take the time to visit America’s most remote island Fort! For more history on the Dry Tortugas and other Florida Keys order a copy of the new The Florida Keys A History Through Maps book or visit our website here! If you have any questions please feel free to contact The Island Map Store at 239-963-3497.
Read More
Categories: Book Blog
Back to Top