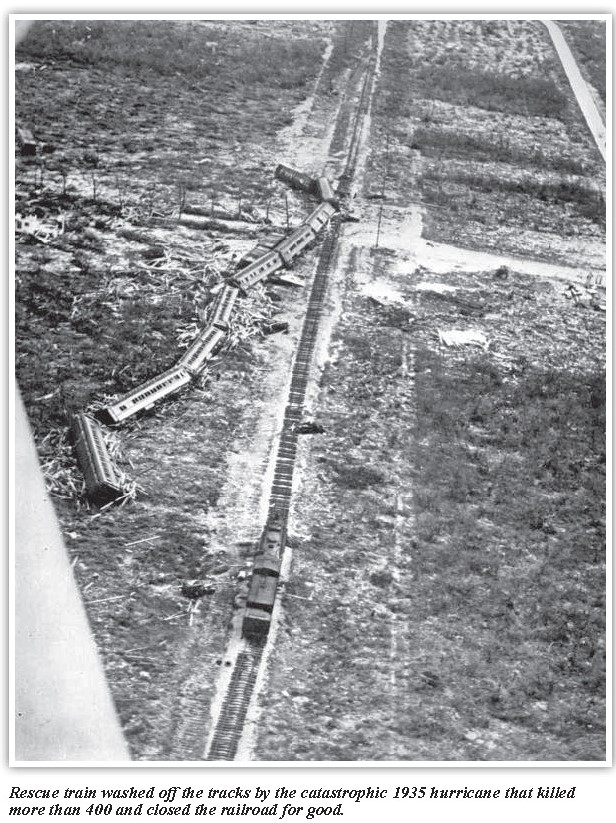 Hurricanes in the Florida Keys have been occurring as long as man has kept records. Spanish fleets were destroyed in 1622 when the treasure galleon Atocha sank near the Marquesas and again in 1733 when more than a dozen ships were lost along the Florida reef launching a massive search, rescue and salvage operation from Havana. When you live on the coast in Florida, hurricanes are as much a fact of life as wildfires in California or tornadoes in the Midwest. Like it or not, they just happen and during the fall you keep an eye on the weather channel. Over 30 hurricanes are reviewed in our new book on the Florida Keys beginning in the early 1800s when the Keys were first settled. In 1846 all but eight of six hundred homes in Key West were destroyed, virtually all of the boats in the harbor sank. In 1906 a hurricane washed a vessel housing men working on the Over-Sea Railroad out to sea, killing dozens. In 1935 that same railroad came to an end as the great Labor Day Hurricane shredded the tracks and killed over 400, making it the deadliest storm ever recorded in the Keys. The U.S. started naming hurricanes in 1953 and no one can forget the name "Irma". That category 4 hurricane hit the lower Keys on September 10th, 2017 with winds over 130mph and a storm surge of 8 feet destroying hundreds of homes and businesses, over 700 boats either sank or floated away.

I'm an Ocean Engineer and have been cleaning up after hurricanes my whole career. Marinas and shorelines often need to be rebuilt and we're called in to re-design and manage the work. In a sick kind of way hurricanes are good for business, but Irma badly damaged my own home and I got to experience the heartache myself enduring months of clean up and rebuilding. It's not really the storm that gets most people, I actually found it interesting, it's the aftermath working in the heat of south Florida without power and struggling to get supplies and rebuild. The trauma is very real and my friends in the Keys went through a lot of it. For more information on this history of the Florida Keys, check out our latest book The Florida Keys: A History Through Maps. Also check out our custom maps of Florida, the Caribbean, and other coastal regions! If you have any questions regarding our products or would like to place a custom order, call 239-963-3497.
Read More
Categories: Book Blog
Back to Top