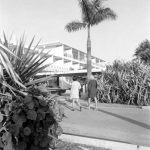 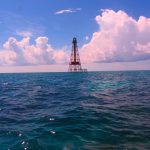 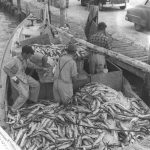 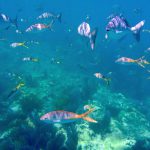 I have been frequenting Marathon for the last few years working with my friend Brian Schmitt on our Florida Keys history book. We both collect antique maps and hence included in the name “A History Through Maps”. When we started the project I didn’t realize what a pivotal role Marathon played in Henry Flagler’s Oversea Railway. The Keys railway began in 1905 and soon Marathon became a work camp and headquarters for the project. Every type of industry emerged to serve the railroad: machine shops, steamship landings and supply depots, housing, administrative buildings, a post office and schools. By 1908 the train rolled into town. The track ended on a man-made island of pilings over the water by Knight’s Key, west of Key Vaca. The pile-supported village had a train station and ferry landings to take passengers to Key West or Havana, restaurants and even a hotel! Prior to the name Marathon, the area was called Key Vaca. The Spanish may have named it Key Vaca for different reasons. “Cayo de Bacas” (island of berries) or “vacas” (cows, likely referring to manatees) or one of their own men named Vaca. Calusa and perhaps Tequesta Indians inhabited the area in the early 1500s when the Spanish first arrived. In Key Vaca settlers from the Bahamas and others from New England built small communities and sparsely populated the area in the early 1800s, living off the sea by fishing, salvaging shipwrecks and agriculture. As in the Bahamas, the rocky nature of the soil and lack of abundant fresh water made for poor farming. Wrecking once sustained the Keys with cargos being auctioned off in Key West but in the late 1800s the business was doomed by the advent of lighthouses and steamships which made shipping along the Keys reef much safer. Railroad construction brought a boom to Marathon but things went into decline once the track was finished to Key West 1912, when it took over the role of southern most port in the United States. The railroad ended for good in the Labor Day Hurricane of 1935, but the storm brought an opportunity to repurpose the railroad bridges for cars and in 1938 the Keys Overseas Highway was completed from one end of the Keys to the other. Marathon gained an airport during WWII, it now features a long runway and has international standing with an active U.S. Customs and Border Protection facility. As the island grew, a number of dredge and fill subdivisions were completed in the 1950s and 1960s, providing hundreds of waterfront homesites. Key Colony Beach sprang from a 1959 dredge-and-fill project that added land and canals to the formerly low-lying island. Other communities sprang up in the area as well, like Duck Key with it’s now famous resort. Environmentally minded projects have also been built including the Dolphin Research Facility on Grassy Key and the Turtle Hospital in Marathon that opened in 1986. Curry Hammock State Park was created in 1991 and includes large areas of mangrove, rockland hammocks and seagrass beds vital to preserving the ecosystem of the Keys. Crane Point Hammock Museum and Nature Center in Marathon includes walking trails and a beautifully restored Bahamian settler’s house from the early 1900s. The Marathon - Duck Key area today has everything you want with a laid back island style; plenty of boating, diving and snorkeling, sightseeing and fishing with excellent restaurants to enjoy the local seafood. To learn more about history of Marathon and other islands in the Florida Keys, check out The Florida Keys a History Through Maps. The book and custom map of the keys can be purchased online on this website. Questions? Call us at 239-963-3497!
Read More
Categories: Book Blog
Back to Top