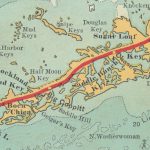 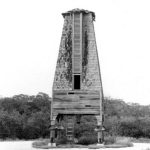 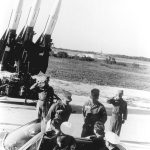 When flying at low altitude over the Keys, I can easily see where man made projections of land are along the Overseas Highway. This is where railroad men in the early 1900s used fill to connect areas of dry land and/or to shorten bridges. Friends of mine have rented or owned houses on Sugarloaf over the years and I remember flying down to the little airstrip there from Naples to “rescue” friends that were trapped after Hurricane Andrew closed sections of highway around Miami. The iconic Bat Tower was still standing near the Sugarloaf Lodge, though it’s purpose to control mosquitos never worked out.

In 1909 two brothers, Charles and George Chase, namesakes of the railroad’s nearby Chase Station, bought land on Sugarloaf and proceeded to pioneer efforts to grow sponges in the Keys, beginning in Sugarloaf Sound. The community of Chase was born, complete with a post office, housing and commercial buildings but the sponging venture failed and the town disappeared after the First World War. The name Sugarloaf likely came from a variety of pineapple once grown in the Keys, the “Sugarloaf”, or a nearby Indian mound resembling an old-fashioned loaf of sugar.

The Saddlebunch Keys, just west of Sugarloaf, are comprised of mostly mangroves and then there are small, uninhabited islands both north and south of the Highway until one arrives on Big Coppitt Key. The name Coppitt is said to be a derivation of the Old English word coppice, meaning “thicket.” Geiger Key is south of Big Coppitt at the southeastern corner of Boca Chica. An early Keys settler, Henry Geiger, obtained the land under the Armed Occupation Act of 1842, which was as an incentive to populate Florida if one met certain conditions to settle and remain on land for specified amounts of time to gain title, “Armed” because Indians were still a big threat to settlers.

Boca Chica is Spanish for “small mouth,” which may have referred to the narrow channel on the island’s western side now adjacent to Naval Air Station Key West (NAS Key West). Boca Chica is mostly salt marsh and mangroves but it’s home to a state-of-the-art training facility for air-to-air combat aircraft of all military services. Driving through the Keys one can often spot jet aircraft overhead and I’ve marveled at seeing some climb vertically into the sky.

Stock Island is the last island stop before entering Key West. The name comes predictably from herds of livestock that were once corralled there. Much of the island was altered by railroad crews recruited from adjacent Key West when jobs were scarce. They used the combination of “men, mules, dynamite and wheelbarrows” to prepare the land with fill and build up the roadbed for the coming railroad. The work was completed in 1907 with 200 men whose goal was to “complete 50 feet of fill per day” in preparation for the arrival of Flagler’s train in 1912. Stock Island was home to the Keys pink shrimp fleet and now has several nice marinas. Many commercial fishing boats still operate from there along with please boats.

For more information on Sugarloaf Key and neighboring islands check out The Florida Keys: A History Through Maps! Please call 239-963-3497 or visit our website here.