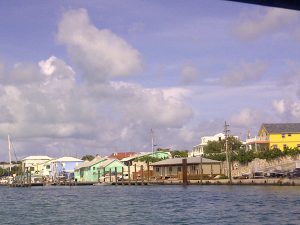 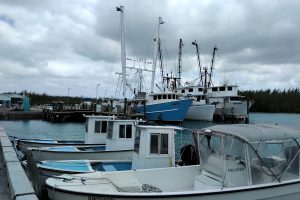 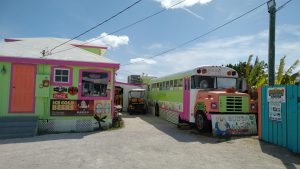 Distinctive Colorful Buildings on the island 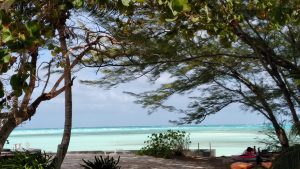 If any of the Bahamas Out Islands (Family Islands) have changed for the better over recent decades it has to be Spanish Wells. I think most would agree it was less welcoming back in the late 1970s and 80s with the residents more reserved and cautious of foreigners, but that has totally changed. My first wife won a trip there in 1979 after a time-share promotion on Marco Island promised a “free weekend in the Bahamas”. We ended up in a tired old hotel on the beach in Spanish Wells with more time-share indoctrination by American sales agents. My response was to rent a little skiff and go on a day trip to Harbour Island where I’d been in ‘77. That was the first time I navigated the “Devils Backbone”, a treacherous series of reefs that stretch from Spanish Wells to Harbour Island. It’s likely this is where the Eleutheran Adventures were wrecked in 1648 when they arrived from Bermuda to settle the Bahamas. They first moved into a cave on north Eleuthera ,“Preachers Cave”, and then spread out to other settlements including Harbour Island and Spanish Wells.   The name Spanish Wells is telling and the island was just large enough to have a few productive “wells” for fresh water. The Spanish discovered the Bahamas in 1492 and went on to enslave the entire population of Lucayan Indians who were extinct by the early 1500s. They lost interest in the Bahamas since there was no gold, silver or (then) slaves but the arrival of English settlers in the mid 1600s did not go without notice and raids on little settlements around the Bahamas were common. Settlements were also raided by French and other sailors to the extent that during the peak of piracy in the early 1700s, Harbour Island actually welcomed pirates into their community to man the guns and ward off  attackers. Some went straight and married local girls.   The community of Spanish Wells evolved into the most productive fishing community in the nation and today hosts a vibrant working waterfront. Fisherman on the island learned how to harvest crawfish (lobsters) efficiently and pioneered the use of “crawfish condos”. These structures are made of wood and sheeting to create bottom habitats the crustaceans are drawn into for protection from predators. The habitats are scattered over the vast Bahama Banks and are now located with the use of GPS. Mother ships from Spanish Wells set out on multi week trips during crawfish season, towing a number of smaller skiffs with young divers who harvest crawfish from the habitats. As the motherships arrive back in port, you can watch thousands of pounds of frozen crawfish tails being unloaded in the harbor. Fishing made the island wealthy and expertise in boat building and marine services have made it’s people proud.    Today Spanish Wells is a fantastic place to visit, but you’ll find no big hotels or resorts there. The waterfront is alive with activity, golf carts running around instead of cars, and there are a number of good restaurants where you can have an alcoholic beverage (until recent years prohibited on the island). The community is colored not only by the interesting fishing vessels in the harbour but brightly painted and decorated homes and buildings throughout the town. I like to keep our boat at Spanish Wells Yacht Haven which has been re-built with new docks and a good restaurant in recent years. The island has become one of our favorite Bahamian destinations of all.     To learn more about the history of the Bahamas check out our book The Bahamas A History Through Maps. Feel free to call the Island Map Publishing store with any questions or to discuss a custom map order, our number is 239-963-3497.
Read More
Categories: Book Blog
Back to Top