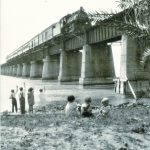 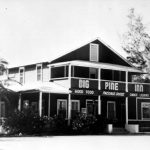 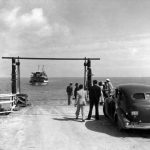 When starting over the Seven Mile Bridge from Marathon to Bahia Honda I like to imagine the train station that once stood over the water just offshore, serving as America’s southernmost port from 1908 until 1912 when the railroad reached Key West. The seven mile bridge itself was an engineering marvel of it’s time and one of the longest bridges in the world, some of the original structure can be seen today running to Pigeon Key north of the Overseas Highway. Reaching the other side of the bridge you cross several small islands including Missouri and Ohio Keys, reportedly named by railroad workers after their home states, then Bahia Honda with it’s State Park. Bahia Honda’s name originated from the Spanish, meaning “deep bay”. Crossing this deep area with notoriously strong currents, the Bahia Honda Bridge has been described as “the greatest engineering challenge facing the entire railroad project.” Just west of the west of Bahia Honda bridge is Scout Key, formerly known as West Summerland, ten miles east of the much larger Summerland Key. The island was renamed after adjoining Boy Scout and Girl Scout camps and possibly to end confusion with the other Summerland Key further west. Originally there were three keys where Scout Key is today: West Summerland, Middle Summerland and another small island. They were all joined with fill during the railroad project to avoid having to build bridges, a practice common throughout the Keys. No Name Key is north of Scout Key and was the ferry landing for the first Overseas Highway which opened in 1928. A hurricane in the Upper Keys ended the railroad and made room for the existing bridges to be used by cars instead of trains. No Name Key was not on the railroad line and thus was isolated from the highway which was completed in 1938. Key deer still thrive on Big Pine thanks to the abundance of natural fresh water. A geological difference in the limestone of the Lower Keys allows for this, unlike the more porous Key Largo limestone further up the Keys chain. In 1906 workmen finished a 100,000-gallon water tank for the railroad and later created a freshwater pond said to hold a million gallons of fresh water. Settlement of Big Pine Key began in the middle 1800s to supply growing Key West with produce and charcoal since most of the farmland and trees in Key West had disappeared. The sole inhabitant of Big Pine listed in the 1870 census was George Wilson “charcoal burner or wood cutter.” Other islands in the area (Little Torch, Ramrod and Summerland Keys) were scarcely populated until the highway brought tourists and land developers who created waterfront subdivisions in the mangroves and shallow bays with fill dredged from canals for the houses and docks you see today. To learn more about history of Bahia and other keys in the Florida Keys, check out The Florida Keys A History Through Maps. The book and custom maps of the Keys can be purchased online at this website. Questions? Please call 239-963-3947.
Read More
Categories: Book Blog
Back to Top