Area Maps of the Florida Keys

Island Map Publishing is a small company I started years ago since clients of our Marine & Environmental services company liked the maps we produced for their projects. I collect antique maps from the 1500s, 1600s and 1700s when most of my collection is dated. They originated in Europe where maps from that era were made and displayed on the walls of those who dreamed of and studied the New World. We decided to make similar maps of America’s coast, including the Keys, along with islands in the Bahamas and Caribbean. They’re colorful wall maps to dream, reminisce and plan trips upon.

We started making the maps years ago when talk of writing a Keys history book began with Brian Schmitt, my co-author and fellow map collector. Ten areas were chosen for individual maps, areas which have never been shown in the fashion we’ve crafted them – colorful wall maps to dream upon. 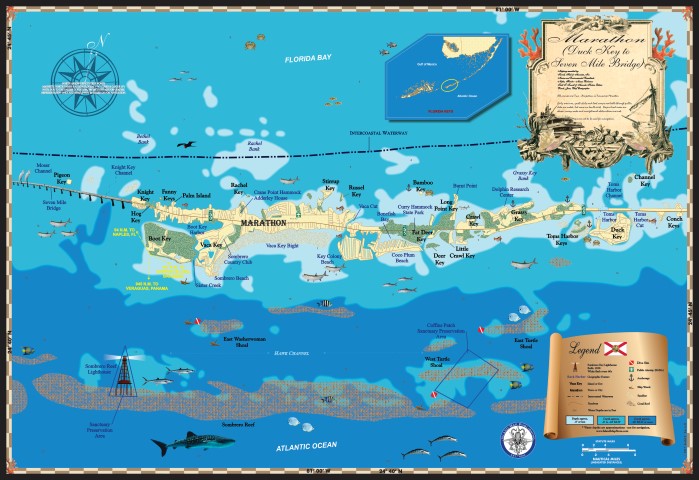 The new maps are used in our book to describe the history of those individual areas, how they were settled, when the railroad came through, unique features and stories about that particular stretch of the Keys along A1A. They’re also used to compare with the first detailed Keys maps, produced by the U.S. Coast Survey in the mid/late 1800s. The Keys were virgin then and the Coast Survey work is displayed next to our 10 modern era maps at the same scale. The comparison shows how the islands were altered by causeways and bridges built for the railroad and by the later development of dredge and fill waterfront subdivisions. The changes are dramatic. Additional detail can be seen in development area overlays used in the next chapter, clear overlays on top of 1959 aerials that show how land emerged from the swamp and sea. These are at a scale where Individual lots can be picked out if you or a friend lives in the area. The images are astounding.

To check out all of our maps visit our site today! If you have questions regarding the size, material, or just curious about the store please call 239-963-3497.

Categories: Maps
Florida Keys Keys history keys maps
Prev postNext post
I’ve been lucky to have visited Cuba a number of times and traveled the coast visiting old towns
Read More
The Island Map Store’s Barbados map was made several years ago along with other islands in the lower
Read More
I’ve always enjoyed Jamaica since working there in the late 1980s and 90s. When Hurricane Gilbert mashed up
Read More
Long Island has to be the “longest” true island on the eastern seaboard of the U.S. I’m from
Read More
The Outer Banks is arguably the most famous string of barrier islands in the United States. The archipelago
Read More
With every map we make at Island Map Publishing, I physically go to the area being drawn to
Read More
I often give talks on history using antique maps as props. The maps are usually from my collection
Read More
Years ago I put an ad out for a partnership interest in my plane, a high performance Cessna
Read More
If you’ve browsed our site you might have noticed Island Map Publishing makes not only color maps but
Read More
I’ve been going to the Exumas since the late 1970s as a pilot. Flying down the Exuma chain
Read More