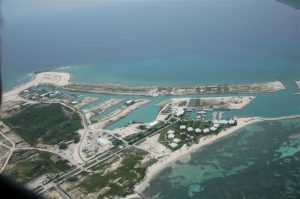 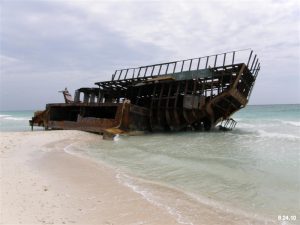 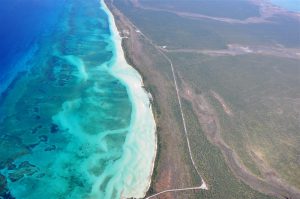 Grand Bahama is one of the largest islands in The Bahamas and home to Freeport with the largest container yard in the country, ship repair facilities, limestone mining and oil storage. The island borders the Northwest Providence Channel, the largest shipping lane in The Bahamas where thousands of ships transit the waterway yearly, some stopping at the port but most completing their voyages to and from Europe. It’s over 70 miles from West End to Deep Water Cay in the east and Grand Bahama has one of the largest submerged cave systems in the world. I fly over frequently on my way to Abaco or land in Freeport to meet clients or visit yachts at the shipyard. In flight you can see the huge expanse of Grand Bahama and the long solitary road running along  shore with endless beaches and few people as you go further east.

The first known permanent settlers were likely British Loyalists. The Crown granted large tracts of land to the Loyalists and in 1806, 500 acres on the island’s western end was granted to Joseph Smith who made the first official settlement. Farming was difficult in the Bahamas and most communities on the island would have struggled, but there was a time of great prosperity during American Prohibition (1920-1933). West End was a primary waypoint for alcohol entering the United States. Rum-runners, or bootleggers, were U.S. citizens who ran speed boats to The Bahamas where liquor was legal because it was British territory. They would buy booze at inflated prices and then penetrate the dragnet of federal agents into southern ports to supply a nation starved for liquor. Family fortunes were made that endure to this day.

A decade after Prohibition came the logging business. Caribbean pines are found on only a few islands in The Bahamas including Abaco, Andros, Grand Bahama and New Providence. In the 1940s loggers moved from Abaco to a concession on Grand Bahama owned by Wallace Groves, who used money from timber firm to start Freeport in the 1950s. Hawksbill Creek was located on the western side of Grand Bahama not far from one of the logging camps. In 1955 the Hawksbill Creek Agreement was made between The Bahamas government and Wallace Groves. He created the “free” port with relaxed duties and his Grand Bahama Port Authority dredged what has become the largest port in The Bahamas.

In 2006 a large development was attempted just east of West End, Ginn Sur Mer. After investing heavily in canals, roads and infrastructure the development failed around the time of the economic crisis in 2008. The harbor created awaits future development like other waterfront areas in Freeport including properties around the Grand Lucayan Waterway, which runs from the south side of Grand Bahama all the way through to the north side.

Grand Bahama remains a beautiful place to visit if you enjoy gorgeous beaches and long drives along a desolate coast, with all sorts of opportunities to explore and enjoy the quiet sea in solitude.

For more information on the history of the Bahamas, check out one of our history books: The Bahamas A History Through Maps. If you have any questions or want to discuss a custom order please do not hesitate to call 239-963-3497!