History of Conception Island in The Bahamas 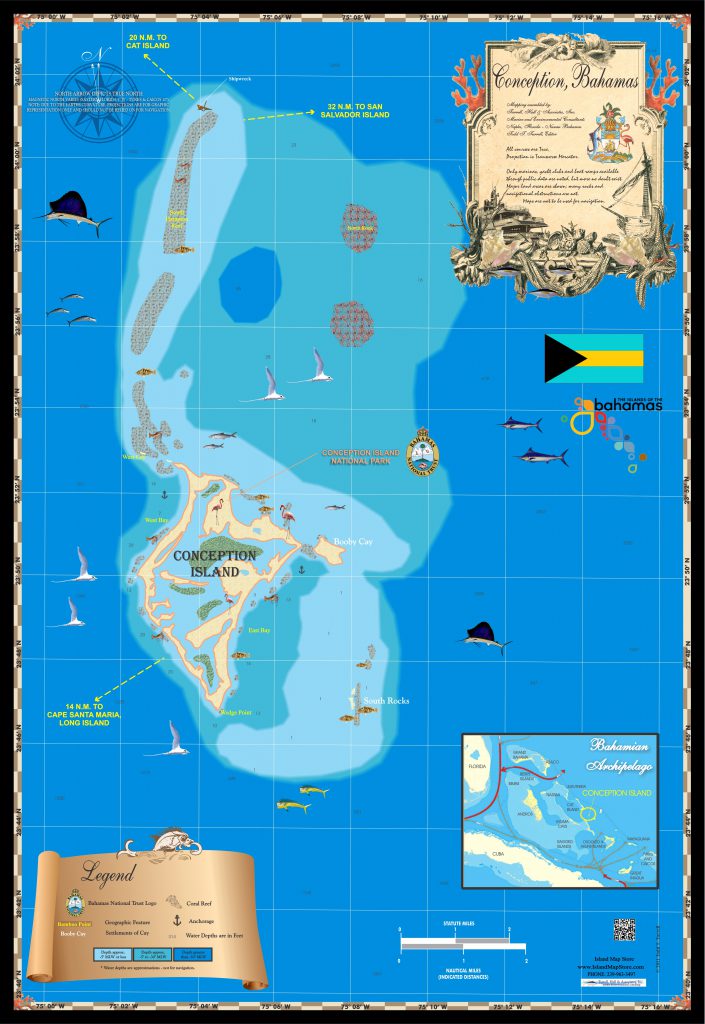 Conception Island National Park is a wonderful place I’ve enjoyed on numerous trips. The island is deserted and the only access is by boat. I often anchor off Cape Santa Marina at the north end of Long Island which is less than 20 miles away, but for most it’s distant journey which keeps the little island group pristine and uncrowded. It’s over 150 miles to Nassau. Conception was designated a national park in 1964 and is managed by the Bahamas National Trust. There are several mooring buoys offshore but otherwise no modern conveniences whatsoever.

The island has lovely beaches and rocky hills surrounding a large interior lagoon with a labyrinth of waterways that connect mangrove-lined bays and flats that can go dry at low tide. The lagoon is filled with life including fish of many types, turtles, rays and sharks that can be seen in the shallow water on the flats. Wading birds are all over the lagoon including great blue herons, smaller heron species, various ducks, terns, stilts, oyster catchers, ospreys and sandpipers with frigates and lovely tropic birds overhead. Sometimes the white tropic birds with their long tails appear to be blue as the sun reflects off the white sand under the shallow blue sea (I once had to convince a stubborn friend on my boat that the birds weren’t actually blue!). Conception may be home to the largest concentration of this elegant bird in the entire Bahamas. It’s a truly a magical place and Booby Cay, to the east of the main island, is a significant nesting site for terns and other seabirds. 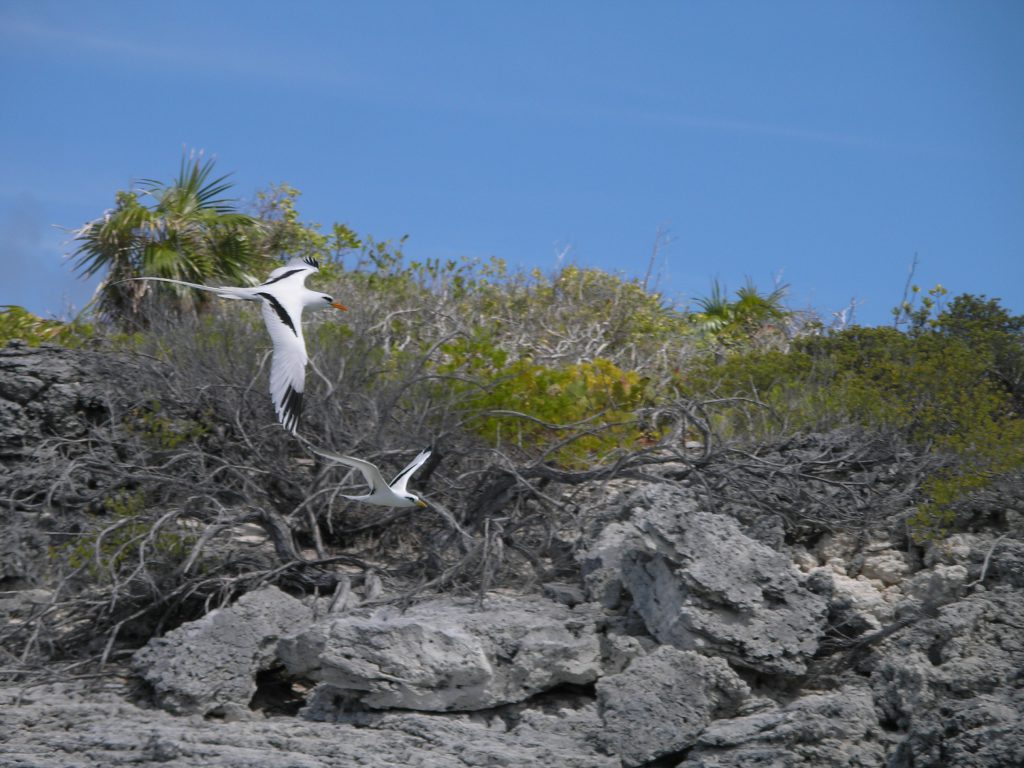 There’s beautiful reef on the north side of Conception with a proliferation of unique corals and the remains of two ships from the War of 1812, including cannons and anchors submerged in shallow water. The British frigate “Southampton” had days earlier captured the smaller American brig “Vixen” and both hit the reef together one November night. Three hundred men made it to shore in the ship’s boats which were soon dispatched to seek help from Cat Island to the north and from Nassau further west. There were few supplies salvaged from the wrecked ships and the men lived primarily on the abundant conch they found and what little fresh water was available. They were eventually taken to Jamaica by several British ships that came to the rescue. A written narrative about the event estimated the men ate nearly 1,100 Conch in the 10 days they were on the island, over 3 per man per day. It’s also interesting in just those few days several “wreckers” showed up, an indication of how common ship wrecks were throughout the islands at the time. Wreckers were men who sought fortune by salvaging cargos off of shipwrecks after first rescuing any anyone aboard. 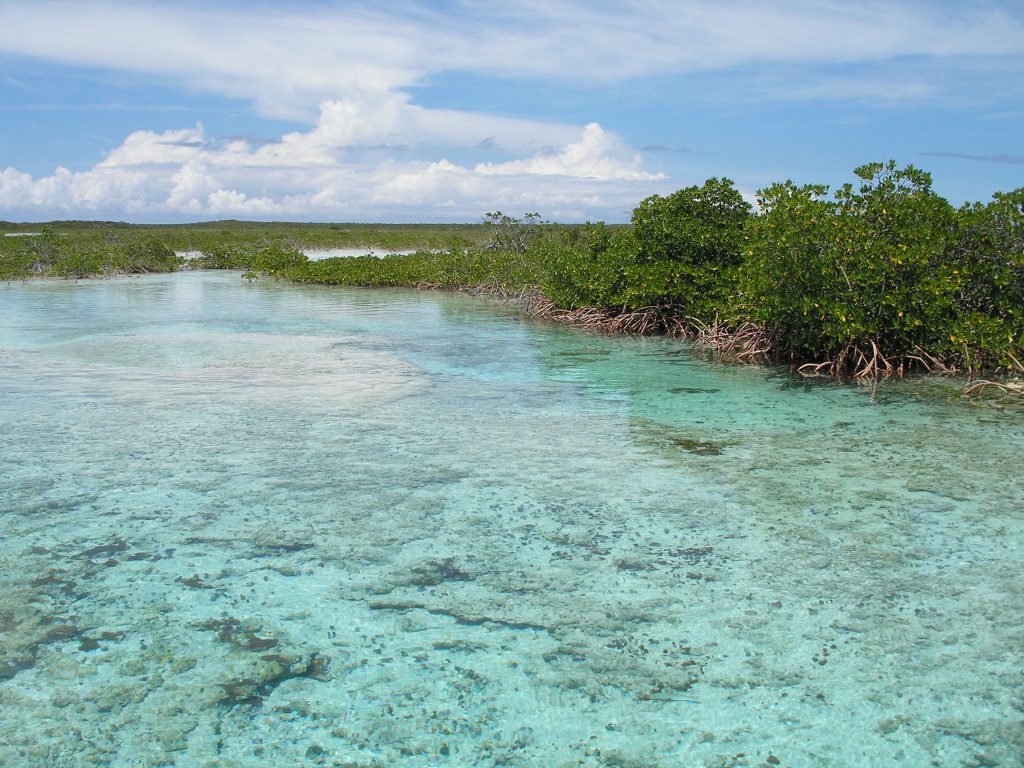 There’s little human history written about the Conception, though some ruins can be seen from an early attempt at settlement. The lack of fresh water no doubt played a role in any desire to live or keep livestock there. This has had the great advantage of keeping Conception in a pristine condition resulting in a spectacular national park of the Bahamas, far enough from civilization that it’s likely to stay that way.

For more information on other Bahamian islands check out our site or The Bahamas: A History Through Maps! Call today with any questions or to talk about custom map options, our number is 239-963-3497.