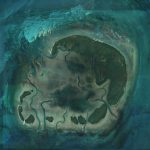 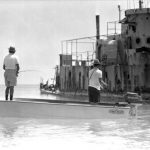 Fishing off an abandoned military ships in Marquesas Keys. 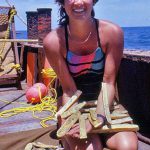 A young biologist aboard a savage vessel holding gold.

The Marquesas Keys is a group of uninhabited islands I’ve passed by many times on the way to Fort Jefferson and Key West, yet I only stopped there once in 40 years! It once one of the least visited areas in the Keys, but this may be changing with today’s faster boats that can cover the 20 miles from Key West in no time. Fort Jefferson and the Dry Tortugas are at least another 40 miles west.

The little island group may have been formed by a meteorite in the distant past leaving a round water body known as Mooney Harbor, some four miles in diameter. The area is known for great fishing and diving and as recently as 1980 was used for target practice by the military (after clearing out fishermen and tourists). It’s now protected within the Key West National Wildlife Refuge.

There was a 50-foot-tall lighthouse called Cosgrove Shoal Light from 1921 to 1935. Prior to construction, many ships sank and the area is littered with shipwrecks, ten or more within a couple miles of the islands and another very famous wreck further west.

The Marquesas were named after the Marquis de Cadereita, commander of the 1622 Spanish Treasure Fleet that was partially sunk in a hurricane en route from Havana, Cuba to Spain. Three treasure laden galleons were among the fleet including the Nuestra Señora de Atocha, the Santa Margarita and the Nuestra Señora del Rosario. The Atocha sank west of the Marquesas with only five survivors of the 265 aboard. The galleon broke up gradually as the hurricane pushed her across the seabed, depositing the valuable cargo on the bottom along the way. Three sailors and two slaves–survived by holding onto the remains of the mizzenmast which stayed above water. A Spanish merchant vessel rescued the survivors so the location was known, but salvage at the remote site was never accomplished until recent times.

In 1985, chicken farmer turned treasure hunter Kane, Mel Fisher’s son, radioed in, “Put away the charts, we’ve found the main pile!” He had located remains of the treasure west of the Marquesas after his father, family and crew spent sixteen years looking. Tragically in 1975, Mel’s son Kirk, Kirk’s wife Angel and diver Rick Gage were killed when their steel salvage boat capsized at night and sank.

For more history on the Marquesas Keys and the other Florida Keys, check out The Florida Keys: A History Through Maps! If you have any questions or wish to see more products from Island Map Store, including our antique map, check out our website here or call 239-963-3497.