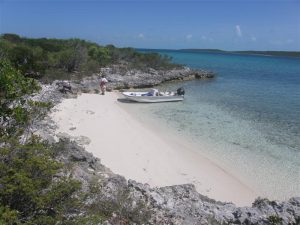 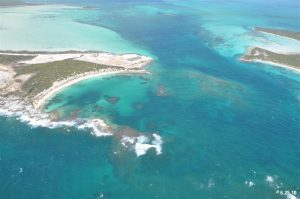 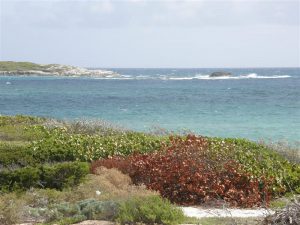 I like the Jumentos Cays because of the remote nature of the long archipelago which stretches from south of Great Exuma to the Ragged Islands off the north coast of Cuba. It’s some 80 miles from one end to the other with several protected anchorages along the way, the only access is via boat. We spent 4th of July weekend there recently and enjoyed it thoroughly while we fished and explored the little islands and beaches that run down the chain. You seldom see anyone and there are no facilities other than in sparsely populated  Duncan Town on Ragged Is. (which has the only airstrip in the Jumentos). Duncan Town is interesting since the salt flats a

re still intact, solar evaporation salt production is how it sustained itself in years past. 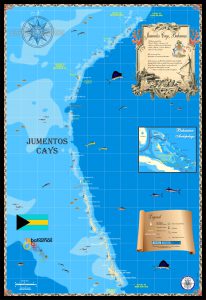 Adjacent to the Jumentos are the deep waters of the Crooked Island Passage, thousands of feet deep with Crooked and Acklins on the far eastern side. Most of the Jumentos are small islands that have seen little or no attempt at any permanent settlement, though some ruins and remnants of slave built walls remain. While the islands are generally unpopulated, in modern times they’ve seen seasonal fish camps due to the abundance of snapper, crawfish, conch and other catches.

Most written history on the area revolves around Ragged Island/Duncan Town. The town was named after one of two brothers who were British Loyalists, Duncan and Archibald Taylor. Major Archibald Taylor assisted Colonel Andrew Deveaux in taking Nassau back from the Spanish in 1783, a famous ruse where an outnumbered Loyalist force under Deveaux outsmarted the Spanish garrison by shuttling forces in small boats to a shore landing out of site. The soldiers would then lay down in the boats as they rowed back out to Deveaux’s small fleet where they would stand up and be counted again by the Spanish as they rowed back in. The numbers added up and the Spanish surrendered without a fight. Families who remained loyal to the British Crown during the American Revolutionary War were sometimes granted large tracts of land in The Bahamas by King George. This is likely how the Taylor brothers ended up with land on Ragged Island.

The brothers built Ragged Island’s salt ponds with the help of slave labor, and by 1886 the town was flourishing with more than 300 inhabitants. British emancipation freed the slaves in 1834, but Ragged Island continued to trade salt for fruits, vegetables and other materials from Cuba until 1960 when the new communist government came into power. At that point coastal trade with Cuba became difficult and the salt trade all but died. Coastal trade of another sort came to Ragged Island in the late 1970s and 80s, that of drug trafficking. The relatively narrow gap between Ragged Island and Cuba is patrolled by three different entities: the Cuban Coastal Defense Force, The Royal Bahamas Defense Force and various entities of the U.S. government including the Coast Guard. Cuban vessels wouldn’t chase drug-running boats outside of Cuban waters and Bahamian/American craft wouldn’t chase them in Cuban waters. This allowed drug runners the alternative of leaving Cuban waters if Cuban vessels were spotted or entering Cuban waters if Bahamian or American boats were in the area. Some of the drug boats would consequently end up in Duncan Town’s harbour.

I’m not certain of any smuggling activity today but feel that Ragged Island and the Jumentos Cays are a safe location to boat and plan on going there again soon.

If you are interested in learning more about Bahamian history, check out our other blog posts and The Bahamas: A History Through Maps! Please contact us at 239-963-3497 with any questions including custom orders.