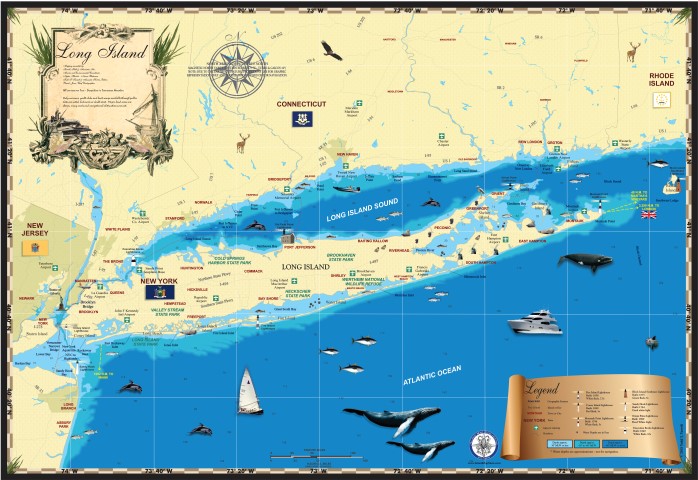 Long Island has to be the “longest” true island on the eastern seaboard of the U.S. I’m from Florida, so here are some comparisons: Long Island would stretch from Key West to the Ocean Reef Club on Key Largo about 115 miles away, the same appx distance as Long Island is from east to west Long Island would thereby cover the largest coral reef in America. It’d span over a million alligators in the Everglades between Miami and Naples, where I live on the Gulf of Mexico. Running east from Miami the island would span the Gulfstream and extend 60 miles beyond Bimini on the Great Bahama Bank.

By far New York’s largest, the island runs the width of Connecticut with Long Island Sound separating the two states. The Island is as diverse as it is long, from Brooklyn’s busy scene at the west end, affluence of the north shore and Hamptons, Fire Island National Seashore, the boardwalk at Jones Beach on the south shore and the relative calm of Montauk. People of almost every nationality on earth live and work on Long Island, the sum of wealth and property exceeding that of some countries.

My experience on the island is limited to a few frantic drives on business, a beautiful run out to Montauk Point Lighthouse and a crazy bachelor party on Fire Island. Since we always have our new maps checked for local knowledge, I turned to a biologist in our office who grew up on Long Island sailing the Great South Bay along the south shore with her father and mother. She checked the proper names of towns and geographic features since we don’t copy other maps to make ours, we study things that make our display of the land and sea unique.

If you’d like to see our map of the island or other maps along the east coast, have a look at Island Map Publishing’s web site or stop by our booth at the Annapolis boat show the weekend of Oct 8th.

Categories: Maps
Prev postNext post
I’ve been lucky to have visited Cuba a number of times and traveled the coast visiting old towns
Read More
The Island Map Store’s Barbados map was made several years ago along with other islands in the lower
Read More
I’ve always enjoyed Jamaica since working there in the late 1980s and 90s. When Hurricane Gilbert mashed up
Read More
Island Map Publishing is a small company I started years ago since clients of our Marine & Environmental
Read More
The Outer Banks is arguably the most famous string of barrier islands in the United States. The archipelago
Read More
With every map we make at Island Map Publishing, I physically go to the area being drawn to
Read More
I often give talks on history using antique maps as props. The maps are usually from my collection
Read More
Years ago I put an ad out for a partnership interest in my plane, a high performance Cessna
Read More
If you’ve browsed our site you might have noticed Island Map Publishing makes not only color maps but
Read More
I’ve been going to the Exumas since the late 1970s as a pilot. Flying down the Exuma chain
Read More