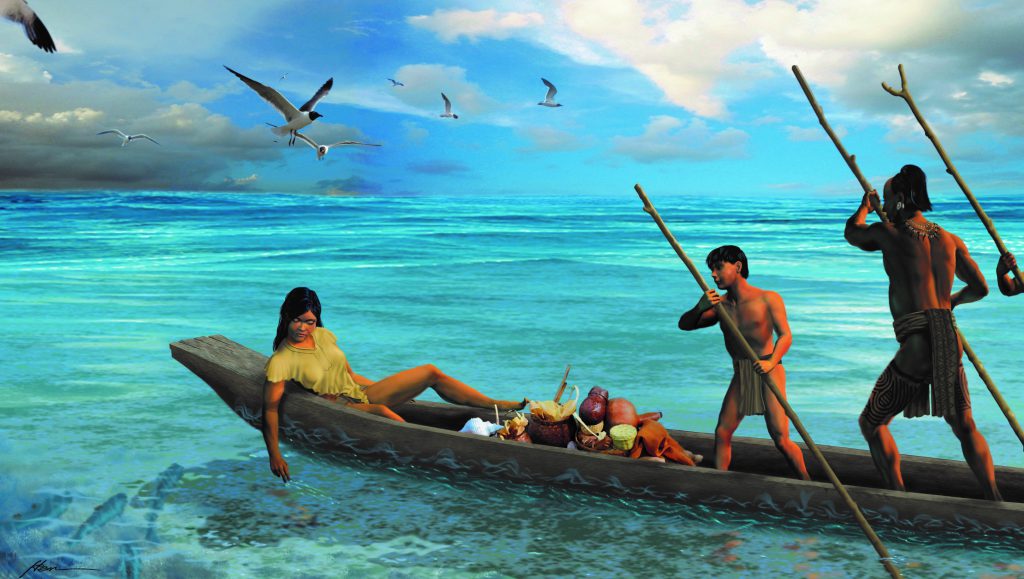 In our new book, The Florida Keys: A History Through Maps, we were honored to have archaeologist Bob Carr write the chapter on the first people who lived there, Native American Indians. Bob, former Dade County Archeologist, has been involved in “digs” in the Florida Keys for years since he lived there as a kid. A dig is where you excavate down into the ground, carefully taking note of any artifacts and how they were positioned in layer upon layer of earth, the lower layers being the oldest.

In the Keys it’s not surprising that many of the artifacts found were related to the sea like shark’s teeth and the bones of sea creatures like fish, turtles and even seals (yes, seals). Caribbean monk seals were found in the Keys early on before they were hunted to extinction, the Spanish called them sea wolves.

The original Native Americans themselves were extinct in the Keys by 1763, emigrating to Cuba as the English came into Florida. By then they’d become allies of the Spanish and helped them salvage their ship wrecks and learn to fish the waters. The “allies” part, however, only came later since Native Americans in the 1500s would typically kill or enslave any Spanish citizen or soldier unfortunate enough to be ship wrecked on the Keys reef.

After the original Native American tribes (the Calusa and Tequesta) left, there was a period of time where the Keys were uninhabited for the first time in a thousand years. Then in the 1800s another tribe arrived, the Seminole Indians who were being displaced by American settlers moving into Florida from the north. This tribe had a rocky start with early Keys settlers as the U.S. Army hunted them there and in the swamps of the Everglades where they hid. In 1840s the Seminoles staged a successful attack on Indian Key killing several of the inhabitants. The threat of Native American Indian attack was so great the remaining farmers and fisherman throughout the Keys fled to Key West until the conflict was settled. Today there are still Seminoles in the Keys, but they’re friendly and come by truck or car from other parts of Florida to fish and enjoy the beautiful waters.

If you’re interested in learning more about the Florida Keys, check out our book The Florida Keys: A History Through Maps. Island Map Store also publishes decorative maps of the Caribbean, Florida and almost all coastal U.S. regions! If you have any questions or would like to place a custom order visit our site or call 239-963-3497, we’re happy to help!