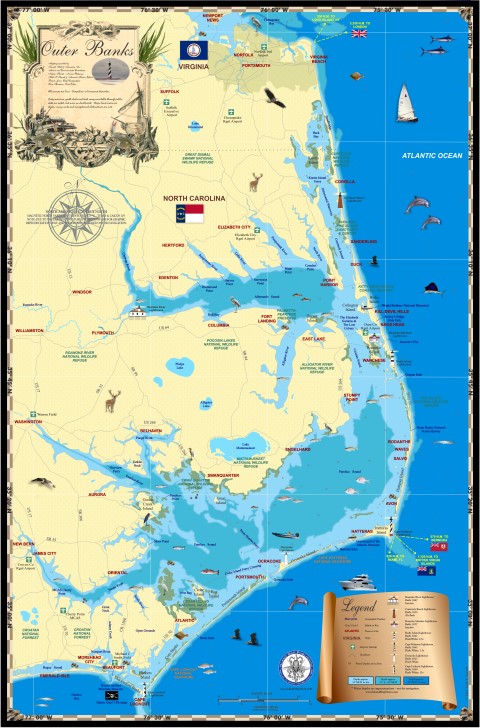 The Outer Banks is arguably the most famous string of barrier islands in the United States. The archipelago runs from south of the Chesapeake Bay and Virginia City to Cape Lookout near Beaufort, North Carolina. The Outer Banks also have one of the most impressive group of Lighthouses in America with light-stations at Currituck Beach, Roanoke Island, Bodie Island, Cape Hatteras and Cape Lookout.

The area has been popularized recently by the hit television show “Outer Banks”, which tracks the path of a wayward group of teenagers who find a large stash of gold coins and are in-turn pursued by evil adults who want it for themselves. It’s a favorite of my wife’s 19 yr old son, of course, and of ours too. We have a friend who organizes the water scenes for the show, so we get some unique insight. He also did the water scenes for the movie “Titanic”, so the series “Outer Banks” is in good hands.

As a kid, I remember vacationing near Kitty Hawk where the Wright Brothers first flew in 1903. That world-changing event stuck into my young mind and I eventually became a pilot myself, working my way through engineering school as a flight instructor. I also recall epic fishing trips out of Hatteras and Ocracoke Inlets where friends and I caught yellowfin tuna and other gamefish offshore. Having them onshore for dinner, with a cold beer or wine, is something every American who loves to eat fish should experience! The Outer Banks also feature loads of parks & preserves, including Cape Lookout National Seashore for kayaking, paddleboarding, boating and other family activities.

For all the above reasons it was a pleasure making a map of the Outer Banks to display on the walls of kids looking to explore and grown-ups who experienced and will never forget memories of these wonderful islands like I do. The Outer Banks Map and others will be on display at the upcoming Annapolis Boat Show in October.

Categories: Maps
Prev postNext post
I’ve been lucky to have visited Cuba a number of times and traveled the coast visiting old towns
Read More
The Island Map Store’s Barbados map was made several years ago along with other islands in the lower
Read More
I’ve always enjoyed Jamaica since working there in the late 1980s and 90s. When Hurricane Gilbert mashed up
Read More
Island Map Publishing is a small company I started years ago since clients of our Marine & Environmental
Read More
Long Island has to be the “longest” true island on the eastern seaboard of the U.S. I’m from
Read More
With every map we make at Island Map Publishing, I physically go to the area being drawn to
Read More
I often give talks on history using antique maps as props. The maps are usually from my collection
Read More
Years ago I put an ad out for a partnership interest in my plane, a high performance Cessna
Read More
If you’ve browsed our site you might have noticed Island Map Publishing makes not only color maps but
Read More
I’ve been going to the Exumas since the late 1970s as a pilot. Flying down the Exuma chain
Read More