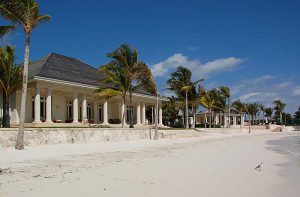 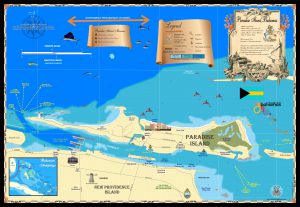 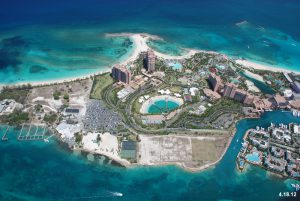 Most people today know Paradise Island because of Atlantis, a large resort distinguished by a world class aquarium and lagoons with water pumped in from the sea. When Atlantis was being built I watched the huge salt water pumps being installed behind what would be large water falls to mask their sound. Paradise Island (“PI” as locals call it) has a beautiful beach with another famous resort, the Ocean Club. There’s lots of shopping on the island with restaurants, bars, boat tours and high end marinas at Hurricane Hole and Atlantis which attract large multi-million dollar yachts.

What I like about Paradise Island is the largely unknown and interesting history. The island acts as a huge breakwater which created one of the New World’s best harbours . The Spanish likely found the protected anchorage in the 1500s and stayed on the leeward side as do ships today. The island became known as “Hog Island” and the oldest existing lighthouse in The Bahamas was built on the western end in 1817. Navigation into the harbour has been greatly improved over the years and the lighthouse remains an important landmark for cruise ships and other vessels. In 1913 the “Porcupine Club” opened on Hog Island, an organization for elite millionaires with buildings on the harbour side and a beach house on the ocean side. Members of the Porcupine Club included U.S. banker Andrew Mellon, J.P. Morgan, Howard Hughes and Vincent Astor. The Club property eventually became an early Club Med which was later incorporated into Atlantis.

Swedish industrialist Dr. Axel Wenner-Gren bought land on Hog island as he fled Nazi influence in Europe before WWII. In 1937 he bought “Southern Cross” from Porcupine Club member Howard Hughes, then the world’s largest private yacht at over 265’ in length. In the early 1940s Wenner-Gren helped create Bahamian jobs at the request of the Duke of Windsor, the newly appointed Governor of the Bahamas who had abdicated the throne as King of England. He employed hundreds of Bahamians to turn a stagnant pond on the island into “Paradise Lake” by digging canals to connect it with Nassau Harbour. In 1961 the property was sold to wealthy American Huntington Hartford, heir to the A&P Supermarket fortune (A&P has been called the Walmart before there was Walmart). It was Hartford who renamed Hog Island “Paradise Island” in 1962 when he began to develop it and the now famous Ocean Club. He purchased stone architectural structure know as the “Cloisters” which originated in a 14th-century European monastery. It was imported to the island, reassembled stone by stone and remains an interesting attraction on Paradise Island today.

Huntington Hartford eventually sold his interests to Resorts International which built the first Paradise Island bridge in 1967. The island became famous as an international entertainment center with casino gambling. In 1987 Donald Trump became majority owner of Resorts International. His shares were later sold to American entertainer Merv Griffin whose wealth was created by successful TV game shows Jeopardy! and Wheel of Fortune. Paradise Island Airways operated from 1989 to 1999 with planes landing on a 3,000-foot airstrip toward the eastern end of the island. The airline connected Paradise Island to Florida along with Chalk’s Ocean Airways, which landed on Nassau Harbour and taxied up a seaplane ramp on the island, a romantic way to arrive! The airport was replaced by today’s luxury homesites with an adjacent 18 hole golf course. South African resort developer Sol Kerzner bought the Resorts International property from Merv Griffin in 1994 and transformed the land into Atlantis, which has been one of The Bahamas’ major success stories and employers for many years.

Paradise Island continues to evolve with many celebrities calling it home. I think PI and the aquarium at Atlantis is a must see for people who’s first experience in the Bahamas is arriving in Nassau on a cruise ship, a yacht or via the many international flights that serve the nation’s capital.

For more history on The Bahamas check out our The Bahamas A History Through Maps history book and visit our site to view our custom maps! Give us a call at 239-963-3497 with any questions!