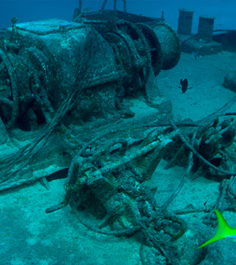 When I was working on Rum Cay as a young Ocean Engineer and pilot in the early 1980s it was about as quiet and serene as you can get. My client was David Melville, an heir to Thom McAn shoes who owned the Rum Cay Dive Club. There was the Club, a short gravel airstrip, Kaye’s Bar, a few dozen natives and some feral cows in the bush – that was about it. My job for David was to stop erosion on the beach in front of the Club and investigate doing a marina in the old salt ponds around Port Nelson, the only settlement. David was a good man, he really cared for the islanders and spent a lot of money trying to help out the dwindling population. Every time I flew in to do engineering work he turned me into a charter pilot flying people in need of a ride on my way out. The airstrip was rough and short with an annoying, slightly dangerous palm tree at one end. The reefs were pristine and full of fish and the beaches long, beautiful and deserted.

Rum Cay was the second island Christopher Columbus landed on in 1492 naming it Santa Maria de la Concepcion. He encountered Lucayan Indians as with his first stop on San Salvador to the east. What are believed to be Lucayan Indian petroglyphs can be seen in caves on Rum but the Indians themselves were exterminated throughout the Bahamas by the Spanish in the early 1500s. Once the people were gone there was nothing else to take and the island remained uninhabited until a large group of settlers arrived in the late 1700s, the British Loyalists. King George granted large tracts of land to the Loyalists on Rum Cay and they came on sailing vessels with seeds of cotton and other crops along with their African slaves, building supplies and livestock including the cows who’s descendants are still there.

It’s hard to believe that Rum Cay once boomed with thousands of residents and a number settlements including Port Boyd, Carmichael, Times Cove, Gin Hill, Black Rock and Port Nelson (the only one still populated). Salt production was once an important industry throughout the Bahamas and salt pans for solar evaporation were constructed on the southern end of the island east of Port Nelson, these are still visible from the air today. Salt and agricultural exports included cotton, citrus fruits, vegetables, pineapples and sisal (a long-leafed, cactus-like plant whose fibers were used to make rope). These crops led to a sustained population on Rum Cay with miles of still existing slave walls marking off properties and pastures. The rocky soil turned out to be unsuitable in the long term and British law freed the slaves in 1834, many of the Loyalists who hadn’t already gone packed up and left. The former slaves who were left behind continued to survive but the population has dwindled for generations.

In more recent years The Bahamas government completed a much larger and safer airstrip. A new marina was also built on the southwest end of the island by the Little family who developed Sumner Point and the island’s first and badly needed safe harbor. Unfortunately a hurricane damaged the marina’s entrance channel proving that life can still very tough on Rum Cay.

Scuba diving off Rum is some of the world’s best. Dive sites with names like The Chimney and The Grand Canyon foretell of the beauty to be seen underwater. Besides spectacular walls plunging off into the abyss, there are shipwrecks to explore including the 1861 wreck of HMS Conqueror on Sumner Point reef. Rum Cay will always be a nice place to visit and a good memory for the author.

To learn more about the Bahamas, check out The Bahamas A History Through Maps. Island Map Store also offers custom maps of the Caribbean, Bahamas, Florida and many more! Call us at 239-963-3497 or visit our site!