History of San Salvador in the Bahamas 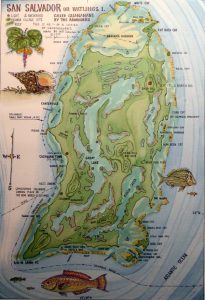 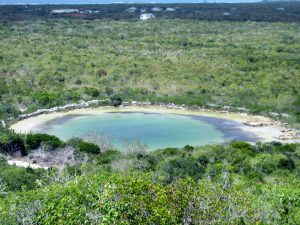 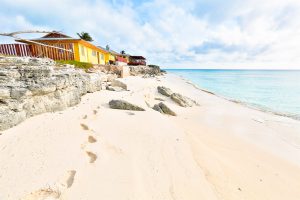 I first went to San Salvador in 1977 as a young pilot with no idea how remote it was. Three college friends loaded into my rented single engine Piper in Miami and off we went, scuba tanks and all. After a fantastic few days in Eleuthera we flew to San Sal where the wall diving was supposed to be great, it was. The hotel with the dive boat is still there today, the Riding Rock Inn, but we saved money the first night by staying in a local’s home. One friend still recalls waking up with the biggest spider of his life in the shower when he went to wash up. I later learned the spider was a relatively harmless Golden orb but you couldn’t have convinced us then! The next night we spared cash and spiders by sleeping out by the plane, the no-see-‘ems ate us alive and we took off at first light for Florida.

San Salvador was the first island in the New World that Christopher Columbus set foot on in October 1492, but due to mapping errors and the vagueness of Columbus’ log, nearby Cat Island was for centuries mis-labled “Guanahani” the native name for the island. I own a number of antique maps that illustrate the confusion, switching the names around until the British Navy settled the issue in 1925. Names didn’t mean much after the first few decades of exploration since the Bahamas were of little value to the Spanish once the native population was gone (enslaved by the Spanish and extinct by around 1525). There was no gold or silver in the Bahamas and the conquistadors’ focus switched to islands further south and then to Central and South America.

The first known permanent settlers on San Salvador after the native Lucayan Indians, and possibly 1700s pirate John Watling, were British Loyalists. The Loyalists fought for King George during the American Revolutionary War and when the British lost they were largely forced out of the new nation. In return the King granted large tracts of land to Loyalists in the Bahamas including San Salvador. They arrived in the late 1700s and brought their African slaves, live-stock and hopes of restoring the wealth they had in America. The soil turned out unsuitable for crops like cotton and even after burning the ancient forests to enhance a thin layer of topsoil, the crops failed and most Loyalists left within a generation. In 1834, British law freed the slaves and their descendants form the base of the population on San Salvador today.

The island is home to a beautiful lighthouse constructed in 1887 by the British Imperial Lighthouse Service, the Dixon Hill Light. In 1951 a U.S. missile tracking station and Coast Guard base were built. U.S. military interests left in the late 1960s and some of the buildings now serve the Gerace Field Station where research on The Bahamas is conducted by universities from around the world.

In later years a substantial new airstrip was built and a Club Med resort established, bringing in tourists from Europe. Riding Rock was also improved with marina facilities. In addition to excellent scuba diving, San Salvador has superb deep-sea fishing and recent International Game Fish Association records for wahoo have come from waters around the island.

For more history on The Bahamas check out The Bahamas: A History Through Maps! Visit our site here to see other products including custom, decorative maps. You can also call 239-963-3497 with any questions!