The History of the Exumas in The Bahamas 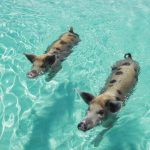 Looking up the chain of Exuma Islands, Bahamas 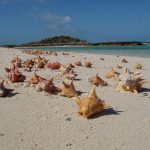 In 1492 Columbus made it into Exuma Sound as he rounded Cape Santa Maria at the north end of Long Island. Since there was no sea lane south from there he would have turned around before encountering Great Exuma Island just 30 miles further west.

Spaniards landing on Exuma later decimated the native Lucayan Indian population. By the early 1500s the Bahamian Indians were gone, enslaved to work in areas with “New World” gold, silver, gems and pearls. There may have been over a hundred years of silence in the Exumas after that except for occasional whalers, wreckers or explorers combing the islands for precious metals and gems that don’t exist in the carbonate rock of The Bahamas.

In the 1600s came the pirates; men of little regard for international laws though many were former privateers who had acted on behalf of England, France and other nations to plunder the ships of their enemies. After wars between nations ended, those who continued plundering ships became outlaws. The pirate community that controlled Nassau in the early 1700s numbered over 1,000 and some had hideouts in the Exumas not far away. When Woodes Rogers became British Governor of The Bahamas in 1718, he pardoned former pirates and chased down those who were unrepentant. Several of the latter were caught in the Exumas and hung on the gallows in Nassau as Rogers sought to make an example of them.

More permanent settlers came to the Exumas in the form of British Loyalists in the late 1700s. “Loyalists” were individuals or families remaining loyal to England’s King during the American Revolution. When the war was lost, they were granted large tracts of land in The Bahamas. They came on ships filled with their possessions and African slaves who had worked the land on their plantations in America for generations. Many had become rich with large land holdings and dozens of servants, why not remain loyal to England who had made it possible? They were determined to recreate that wealth in The Bahamas.

George Town, Great Exuma was named after King George III and became the Port of Exuma on one of the best water bodies in the country, Elizabeth Harbour. There were prosperous times in the late 1700s and the islands flourished. The soil had not yet been depleted of the nutrients that slash and burn farming produced and crops of cotton and other goods were exported. Merchants in George Town carried modern English goods in their stores and vessels sailed directly for Liverpool and London with loads of cotton and happy passengers going back and forth. But these times were not to last.

The soil turned out to be unsuitable for sustained agriculture as they had known in America. By 1800 this was becoming obvious and insects made things worse. In the late 1700s the Chenille worm ravaged the cotton crops along with another red bug that would stain the fibers. Other crops were failing as well and the productive times of Loyalists in the Exumas and The Bahamas was over.

British law freed the slaves and most of those who hadn’t already left did so, leaving their former servants behind. Descendants of those form the basis of the population in Exuma today. Loyalists sometimes held their slaves in high regard as they struggled together to make ends meet on the harsh, rocky islands. In some cases they left their land to them, as on Great Exuma where Loyalist Lord John Rolle turned over significant property holdings to his former servants upon his death in 1842.

After the Loyalist period ended, the Exumas fell on hard times and reverted to subsistence farming and fishing with a few goods traded to Nassau for household supplies. Salt production by solar evaporation on low lying “salt pans” continued with some success.

Brief periods of prosperity in Nassau presented opportunities for Exuma men who emigrated there. During the American Civil War in the 1860s, cotton from the South was traded for European guns destined to be run through the Union blockade of southern ports. While that boom was short lived, sponge diving became a more permanent profession in Nassau employing thousands. In the 1920s Prohibition brought more wealth. Jobs were created not just by selling liquor to rum runners but with infrastructure improvements the tax revenue funded. Bahamian men and women flocked to Nassau for these reasons and many families have their roots in Exuma.

The Exumas are an incredibly beautiful chain of islands that stretch from Hog Cay in the south to the Ship Channel Cays in the north, well over 100 miles away. One of the first Land and Sea Parks in the world was established in 1958 stretching from Conch Cut to Wax Cay, The Bahamas National Trust Exuma Cays Land & Sea Park.

Tourism has become the life blood of the Exumas chain with billionaires and famous performers from around the world owning private islands. Huge yachts can be seen anchored on the leeward west side of the chain while the east side features thousand foot water depths in Exuma Sound with excellent sport fishing and scuba diving. During the 1970s and 80s, at the peak of the drug trafficking years, the Exumas became an epicenter for the illegal trade and Norman’s Cay was controlled by Colombian traffickers for a time.

The “Out Island Regatta” in George Town, Exuma is one of the largest events in The Bahamas each year. The regatta attracts sailing competitors from many Bahamian islands and thousands of spectators.

Flying down the Exuma chain in a small plane is one of the most beautiful flights in the world. The author has done it hundreds of times and every guest he has taken on that flight will agree. There’s no doubt why astronauts on the International Space Station keep taking pictures of the Exumas while orbiting overhead. They are truly the pearl of The Bahamas if you love boating, beach combing and the peace and quiet of islands in shallow seas.

To learn more about history of the Exumas and other islands in the Bahamas, check out A History of The Bahamas Through Maps. The book and custom map of the Exumas can be purchased online at this website. Questions? Please call us at 239-963-3497.
Categories: Book Blog
bahamas Exuma Islands Staniel Cay Swimming pigs
Next post
The military has maintained an important presence in the Keys since America acquired Florida from Spain. A U.S.
Read More
Every since I was a kid I can remember going to Key West and seeing forts, lighthouses, old
Read More
The Florida Keys Oversea Railway was the most ambitious engineering and construction project in the U.S. during the
Read More
The Keys were not officially settled until the U.S. bought Florida from Spain in 1819. During that time
Read More
Unlike the old pirate nest in Nassau, Bahamas, the Florida Keys didn’t have permanent settlements that could support
Read More
Shipwrecks have been a way of life in the Keys since Europeans first arrived in the New World.
Read More
The Florida Keys are defined by one of the world’s great currents, the mighty Gulfstream. It carries warm
Read More
The Florida Keys: A History Through Maps tells the story of the Key’s past using different exhibits to
Read More
In our new book, The Florida Keys: A History Through Maps, we were honored to have archaeologist Bob
Read More
Hurricanes in the Florida Keys have been occurring as long as man has kept records. Spanish fleets were
Read More